Dean grew up in the cold tundra of Mid America in the home town of President Harry S. Truman, Independence, Missouri (a suburb of Kansas City). The radio bug bit early for Dean. His parents never had to fight him about bedtime because lights out meant going on a journey with a transistor radio under his pillow. Darkness brought the signals of Top 40 powerhouse AM stations from far off places. 890 WLS-Chicago, 1090 KAAY-Little Rock, 1500 KSTP-St.Paul/Minneapolis and 1520 KOMA-Oklahoma City were but a few of the signals that gave Dean a glimpse of life outside of his own little world of Kansas City. Listening to these legendary stations ignited a passion for radio. A passion that God had some very big plans for.

Dean’s first known broadcast was at the tender age of 3. A cassette recording that his mom held as potential blackmail material for many years. At age 12 following a typical midwestern blizzard, Dean took the $8.00 reward for shoveling the driveway clear and headed off to Radio Shack. It was time to purchase the most exciting thing he had ever seen in the catalog, the Radio Shack AM Broadcaster kit. With assembly help from his dad, the kit was completed, the 9-volt battery was plugged in and Country Sunshine AM 1230-KCHP was born. Dean’s very own AM radio station had a HUGE fifty-foot coverage area in all directions from the studios and transmitter located in his bedroom! But 9-volt batteries are expensive so he also got his feet wet as a salesman. Selling commercials to the neighborhood Avon and Shaklee distributors took care of the massive power need and kept 1230-KCHP on the air every weekday after school and from the moment he woke up until bedtime on the weekend.

At the age of 15, Dean managed to talk his way into a real radio station at Oldies 1140-KLDY. The radio journey that started over 30 years ago has taken him from Kansas City to Nashville, Daytona Beach, and Orlando. He was present at the birth of Z88.3 back in August of 1995 and all these years later, still can’t believe what God has done with a little station at 88.3 on the FM dial. Dean is the single dad of an amazing young man of God named Zachary, a pair of Tuxedo cats named Cher and Kahn and Parker the Goldendoodle. He is Z88.3’s Vice President and Director of Operations. Dean and Zachary worship God at the Apopka campus of Journey Church. 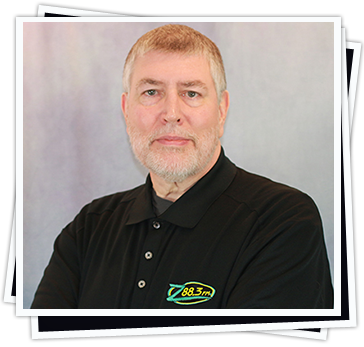