Growing up the oldest child of a United States Air Force Chaplain and musician mother, Mark lived in eleven states and Japan before making his home in Florida. Along the way, Mark met and married the love of his life, his beautiful wife, Alana, in July 1980! Forty years later, he knows it’s still the best decision he ever made!

Mark and Alana are the proud parents of three incredible adult children and a beautiful daughter-in-love.

Mark has called himself a jack of all trades and has many skills that make him a valuable asset to Z88.3. Mark served eight years as a guitarist in the United States Navy Band and eight years as Assistant Chief Engineer at another local radio station. Along with an AA in Electronics Technology from Valencia, Mark completed his Bachelor’s Degree in Conducting from the Baptist College of Florida and a Master’s in Church Music from Southwestern Baptist Theological Seminary. Before coming to Z88.3, he served in music ministry at churches in Texas and Florida for twenty years.

Mark enjoys woodworking and is an FAA licensed drone pilot. He plays guitar, piano and enjoys composing different genres of music. Over the weekend you’ll find Mark grilling burgers for the family or working on a project at home. And always with his phone nearby – just in case there’s an emergency at the Z! 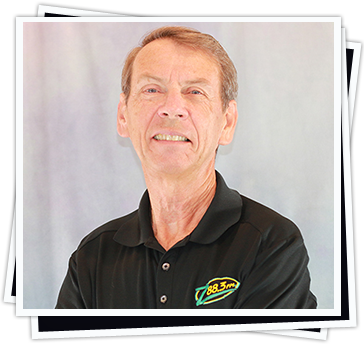