Born and raised in Miami as a pastor’s kid, Ruthie stayed in South Florida to get her bachelor’s at Trinity International University Florida. Just before graduating with a degree in Mass Communication, she began working at WMCU, Spirit FM in 1999 and eventually on the air as “RuthieJ.”

Ruthie was always serving at her Dad’s church including being interim youth director. Keeping up with full-time radio and church ministry burned her out, though. So, once they hired a new youth pastor, she moved to California to start her Master’s degree in leadership at Fuller Theological Seminary.

A year later, she decided to finish her degree online and move back home to be closer to her boyfriend and his kids. In 2008, Ruthie and Israel got married and she became instant step-mom to four children. She also began working at ReachFM in Ft. Lauderdale hosting “Mid-Day with RuthieJ” again, as well as the daily radio program/podcast “Parenting On Purpose” with Dr. Bob Barnes, which continues today.

In 2015, Israel’s company opened an opportunity for him in Orlando. So, they moved up with their newborn twin daughters, Rose and Lily. Ruthie hosted her radio show from home until the station was put up for sale in April of 2016. That’s when the opportunity to be on the air at Z Radio became available and she started on the air the very next month.

Although Ruthie’s cultural roots are from Spain and Mexico, she grew up amongst Cubans and married a Puerto Rican/Colombian. She jokingly says her daughters will be “culturally confused.” Ruthie is beyond excited to represent the Latinos in Z Land and is always on the lookout for fun and funny ways to celebrate diversity and the messy, wonderful lives that only God can redeem. 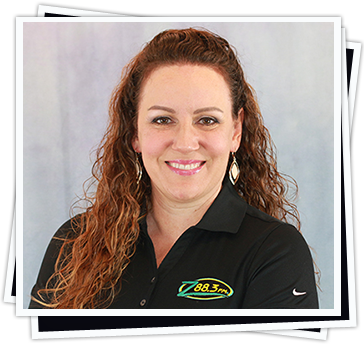