Shadow grew up in one of America’s great small towns, Chesapeake, Ohio (population: 745). Most of his nights were spent listening to Cincinnati Reds baseball games and scanning the dial to hear great radio stations across the Midwest. After his high school guidance counselor suggested that he should “follow his dreams,” Shadow went to broadcasting school in Columbus, Ohio and started his first full-time radio job at the age of 18.

While working at another Orlando radio station, Shadow found himself drawn to the message at Z88.3 and hoped for an opportunity to someday work at the Z. After talking to former Z88.3 morning personality Lisa Williams years ago, he was more convinced that he should someday join the station. When Ellis Feaster was considering joining the Z staff, he talked with Shadow about the decision – knowing Shadow’s love of the Z. In August 2013 Shadow accepted the opportunity to join Z88.3 and couldn’t be more excited!

Shadow is a dedicated supporter of Special Olympics and has an extensive background working with children with autism, including his son, Kyle. As an ordained minister, he lists the opportunity to officiate the marriage of his daughter Kacie and son-in-law, Sergio, as one of his proudest moments; as well as watching his youngest, Kayla, grow into a young lady.

On weekends you’ll most likely find him involved in activities with his kids or at his church, Northland, A Church Distributed. 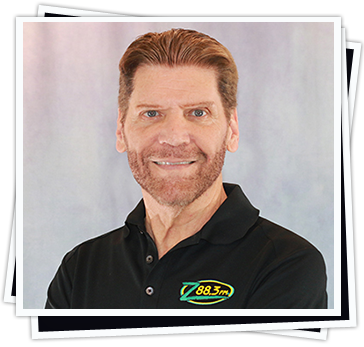